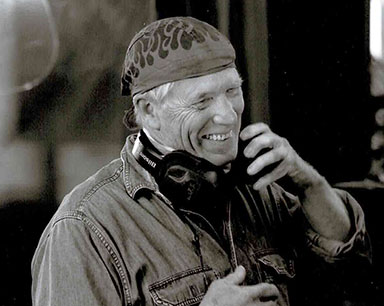 André Harvey (1941 - 2018) was an American sculptor whose realistic and contemporary works are primarily cast in bronze using the lost wax method. Harvey also worked in granite, made collages, painted (watercolors), and produced intricate sculptural jewelry cast in 18K and 22K gold. He worked in the Brandywine Valley, in Rockland, just north of Wilmington, Delaware.

André Harvey graduated from the University of Virginia in 1963. In 1969, after working both as a journalist and an educator, he and his wife, Bobbie quit their jobs in search of a life change and traveled through Europe and Morocco. During this period, Harvey met and worked with abstract sculptor Michel Anasse, in Vallauris, France, which resulted in his focus on sculpture as a career.

Once back in the U.S., Harvey began creating small and large-scale realistic sculptures inspired by his childhood growing up in rural Pocopson, near Chadds Ford, Pennsylvania. Harvey′s first high-profile exposure was the exhibition of five sculptures for the five windows at Tiffany & Company, New York. Since that time, in a career spanning over four decades, Harvey produced an extensive volume of work which was purchased by numerous public and private collections, and featured in exhibitions both nationally and internationally.